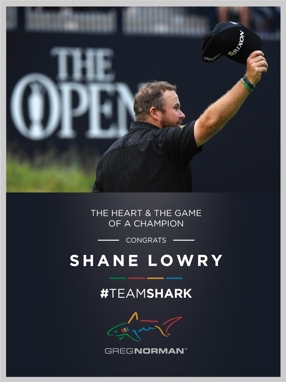 Greg Norman Collection, one of the world’s leading golf inspired sportswear brands, has marked Lowry’s success by creating a bespoke image to celebrate the ‘heart’ and ‘game’ of a true champion.

Russell Brooks, general manager of ProQuip Golf (distributors of Greg Norman Collection apparel in the UK and Ireland), said: “Our heartfelt congratulations go out to Shane on an Open victory for all the ages.

"Golf hoped for an Irish or Northern Irish winner on the Portrush links and Shane rose to the occasion, setting a new course record of 63 on Saturday and holding his nerve throughout a wild and windy final round to win the greatest prize in golf.”

Lowry met up with Gerry Greene, sales agent for Greg Norman Collection in Ireland, during his week-long celebration tour and provided Greene with the rare opportunity to hold The Claret Jug.

Lowry joined #TeamShark in 2018 and quickly won the 2019 Abu Dhabi HSBC Championship in January, adding to previous victories in the 2012 Portugal Masters and the 2015 WGC Bridgestone Invitational at the Firestone Country Club, Akron, Ohio.

Before last weekend’s Open victory, Lowry was best known for winning the 2009 3 Irish Open at Co. Louth Golf Club while still an amateur, beating England’s Robert Rock in a playoff.

His Open victory lifts Lowry to a career high 17th in the Official World Golf Rankings.