Under Armour has announced the launch of its latest golf footwear range, headlined by the winner of the highly coveted and recently announced ‘Best Spiked Golf Shoe’ award from Mygolfspy.com, the HOVR Drive (SRP £140). 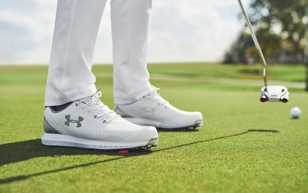 footwear range to hit golf in 2016 and its latest range is no different; grounded in the science of biomechanics, through the brand’s work with world leading bio-mechanist - Jean-Jacques Rivet[PC1] , Under Armour has systematically built upon its bio-mechanically proven traction system.

From Rotational Resistance Traction in 2016 to the creation of both Horizontal & Vertical Traction systems in 2019, Under Armour has led the industry in traction innovation and the new 2021 range makes full use of this leading-edge technology.

Improved and updated for 2021, the UA HOVR Drive utilises Under Armour’s proprietary HOVR cushioning, developed to overcome the limitations of standard EVA cushioning. UA HOVR offers golfers a responsive cushioning system that authentically pushes the limits that footwear can offer the golfer. Its combination of energy return and comfort offers benefits unable to be matched by standard EVA cushioning compounds. 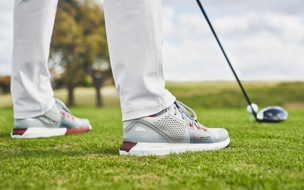 David Stakel, Sr. Director of Compete Footwear at Under Armour says: “Under Armour’s HOVR footwear in golf, is for the golfer that seeks every possible performance and comfort advantage on the course.

“Delivering performance throughout our full range has been paramount to the development of the 2021 range. Every shoe for 2021 benefits from Under Armour’s proprietary Rotational Resistance Traction alongside all the bio-mechanical insights we have developed to ensure golf footwear that truly performs,” he said.

Other models in the range to benefit from UA HOVR cushioning are:

- The new UA HOVR Forge RC SL (£105), which lends a stylistic nod to the brands' heritage and its original Charge RC running shoe.

- The incredibly popular UA HOVR Fade SL (£90), which is now available in two additional colourways (Mod Grey and Academy) for 2021.