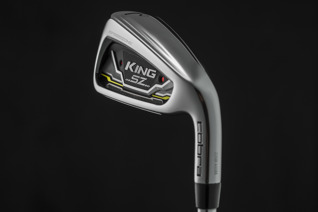 inspiration from design attributes of the fastest cars in the world, focusing its energies on five unique zones of performance to deliver two new sets of irons that provide the optimum blend of distance, consistency and forgiveness.  Below is an explanation of how COBRA has optimised these five zones of iron design in the SPEEDZONE Variable and ONE Length irons.

COBRA Golf offers two distinct iron models in the SPEEDZONE equipment family.  In addition to the aforementioned zones of performance, the KING SPEEDZONE Variable Length Irons (steel - £699) feature a progressive construction design – delivering progressive head shapes, grooves and hosel lengths that optimize launch and spin in the long irons, mid irons, and wedges.  The KING SPEEDZONE ONE Length Irons (steel - £699) offer all the magic of SPEEDZONE technology in a set design that promotes one repeatable setup and swing – for more consistency and accuracy.  COBRA achieves this simplified approach by offering matching lengths (37.50”), head weights and swing weights in every iron.  In addition, the use of fine-tuned lie angles and progressive shaft weighting optimises high launch and forgiveness in the long irons, and lower launch with more control in the scoring irons and wedges.

“When designing irons, there is a delicate balance of delivering playability, feel and distance, and the SPEEDZONE Irons in both traditional and ONE length make-ups provide all three attributes in spades,” said Tom Olsavsky, VP of R&D for COBRA PUMA Golf. “Our innovative SPEEDZONE technology has allowed us to maximise distance without giving up any feel or forgiveness.”

The 2020 KING SPEEDZONE Irons (along with the full KING SPEEDZONE family of products including irons, fairways and hybrids) will continue to employ COBRA CONNECT Powered by Arccos, the award-winning connected golf system that helps players of all skill levels make smarter, data-driven decisions. Electronically embedded sensors in the grip automatically record the distance and accuracy of every shot so golfers can track their improvements round-to-round.

All SPEEDZONE products are available at retail, January 24, 2020. For more information on the full KING SPEEDZONE family visit, www.cobragolf.co.uk.